Michelle Obama talks about being unemployed and boring, Barack having a messy office, which celebrities she texts with most often, writing her new book ‘Becoming,’ their daughters Sasha and Malia running for President someday, their dogs Bo and Sunny, having her mother live in the White House with them, and reveals that they had to pay for their own food during their time there.

Is Tear Gas A Nacho Topping Hilary Swank & Her Parrot Are On the Move 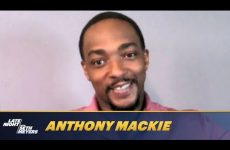 Judge Rules “Presidents Are Not Kings,” Meaning Don McGahn May Be Compelled To Testify