It’s been 6 months since Donald Trump was voted out of office. But while prominent party member Matt Gaetz is being investigated for ACTUAL crimes, Republicans are busy vilifying those in the party who failed to support Trump! Which begs the question…WTF? Deniers, Dimwits, and Lies: How Governors Have Responded to the Pandemic Pt. 1 | Full Frontal on TBS

Donald Trump Gets Us in the Mood for Valentine’s Day 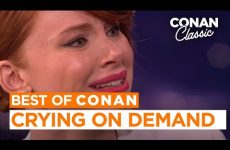 Bryce Dallas Howard Can Cry On Command | CONAN on TBS