Columbus is one of the historical figures we learn the most about in elementary school. There’s a lot going on in the country now, so we decided to combine two of the big stories. We went on the street and asked people what they thought about Trump’s decision to put Christopher Columbus on the Supreme Court. Christopher Columbus has been dead for about 500 years, but did that stop people from having opinions on whether or not he should serve on the highest court in the land? Of course not. #LieWitnessNews

The 2020 Race Is the Only Game of Thrones Left The Best of Good News | The Daily Social Distancing Show

Biden’s Iowa Brawl – Between the Scenes 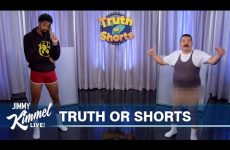 It’s the Military’s Turn to Pay for the WALL

The Kid Gloves Come Off | The Daily Show