Jason Momoa Was Naked When He Found His Missing Pet Python

Jason Momoa talked with Ellen about his sprawling home and the animals on the property – including a bull python that escaped its cage – which he ended up finding six months later! The “Aquaman” star admitted he was nervous being on the show for the first time. He also explained why he shaved off his signature beard, and discussed the new initiative he’s leading to move from plastic water bottles to recyclable aluminum. 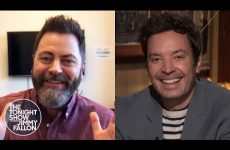 Nick Offerman’s All Rise Is Best Enjoyed with Some Charcuterie

One of Seth’s Writers Explains a Joke: Manatee Appreciation Day