(Original airdate: 11/07/01) Jack Black talks about “the razzmatazz” of fame and pranking Gwyneth Paltrow. PLUS, Jack serenades Conan with his rendition of Seal’s “Kiss From A Rose.”

Can You Feel It? with Reese Witherspoon 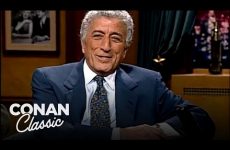 LATE SHOW ME MORE: Oh, It Is Toasty!

Billionaire Bloomberg Has Entered The 2020 Race Because… Reasons?