It was just discovered that Trump sent a strange note to Canadian Prime Minister Justin Trudeau in silver colored sharpie a couple of years ago. Trudeau isn’t Trump’s only pen pal. He was bragging this weekend about a beautiful, three-page letter he received from Kim Jong Un. Trump has shown Kim Jong Un so much affection that we decided to take a look back at the things he has said about him and imagine him saying it about Melania. 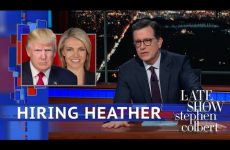 From ‘Fox & Friends’ To U.N. Ambassador?

Nicholas Braun Is On A First-Name Basis With Bill Clinton