Charlize Theron Got Burned By Rhianna Via T-Shirt

Charlize Theron talks about how she sang so bad they cut it from Long Shot, Rhianna burning her via T-Shirt.

Jon Lovett: Some Of The Jokes On The Debate Stage Missed The Mark 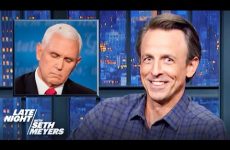